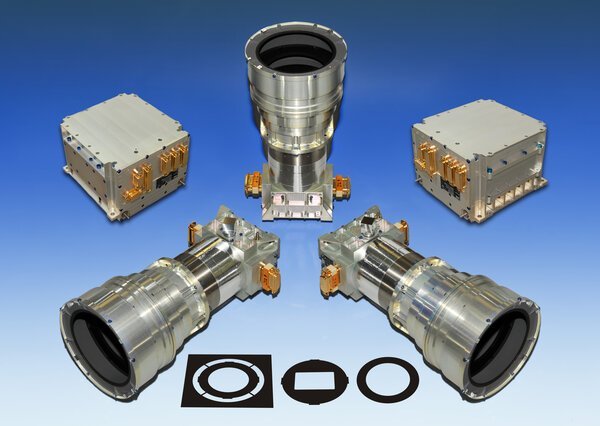 Similarly to how sailors have done for thousands of years, the navigation sensors of satellites now operate in space. With ultra-black layers, which reliably absorb scattered light, these ‘navigation systems’ can be built very light and reliable.

For thousands of years, seafarers relied on the stars and determined their location by means of sextants. The sextants of the satellites, the star trackers, function essentially in the same way. They determine the location and position of the satellites by analyzing the angular distances between the stars and aligning the satellite by comparing it with the on-board computer star database. But while the sailors considered about 100 stars, the star trackers work with several 1,000 stars. These not only allow a safe navigation, but also provide better images by keeping the satellite stable during recording or taking measurements. To be able to measure the star positions accurately, disturbing scattered light must be safely eliminated with as little additional weight as possible, high accuracy and ever smaller satellites.

Initially, the satellites often weighed several tonnes and the corresponding launch costs ranged from a few tens to over 100 million euros, depending on the launch vehicle. In contrast, the ever smaller and cheaper satellites, also called pico-satellites, nanosatellites or CubeSats, weigh a maximum of a few kilos and the cost to put them into orbit is a few 10,000 euros.

This great performance of these small satellites is not only seen in the earth orbit. MarCO-A and MarCO-B were NASA’s first two CubeSats that participated in the interplanetary mission of the Mars space probe InSight on 26 November 2018. Released in Mars orbit, they enabled communication between the surface of Mars and Earth. To perform such a task, the two MarCOs had to be optimally aligned.

In the Earth orbit, similarly to the Mars project, there is a problem for satellites: the intensity of the sun would cause the detector to become saturated in a short time and, thus, practically blind. For position measurements, however, the star tracker must be able to detect the stars in the background. To identify these stars, the intensity of the bright scattered light sources outside the field of view must be attenuated with a baffle.

A baffle is an opto-mechanical device installed at the entrance of the star tracker. In the baffle, additional vanes help to eliminate scattered light as completely as possible. For this purpose, baffle and vanes must be coated with a highly absorbent material. Since every additional gram is very important for a small satellite, a suitable design of the baffles is needed that combines maximum efficiency with minimum size and number of vanes.

For blackening, there are several methods available. Black anodized aluminum adheres very well, but does not absorb in an optimal way, because the black coloration of the layer does not necessarily make it an ideal absorber for scattered light. Therefore, these layers must also be absolutely reflection-free. This is achieved by adding cavities that are large relative to the spectrum range of interest, i.e. wavelength range. This roughness reflects the light several times within the material, and each time it is reflected, unwanted light is ‘lost’. The more reflections occur, the less light can leave the surface. So, a surface with a ‘bad’ black and a reflectivity of about 10 to 15% will become much better if the light within the surface can be reflected only 3 times. Such microscopic roughness can be created by etching the metal surfaces. These micropores make the previously shiny surface appear black. Other methods to produce such rough layers is by sputtering.

Another method to create rough layers is floccation. During flocculation, small fiber particles or carbon nanotubes are applied to a sticky surface. Here, mostly parallel fiber structures are created, which provide a regular roughness and with which absorption values of over 98% can be achieved.

To reach the highest absorption possible a completely randomly distributed roughness is needed. With it’s unique vacuum deposition process Acktar comes very close to this goal. The black layers created by this process have a randomly distributed roughness from which hardly any light beam can escape, regardless of the wavelength of the light. These deep black layers achieve a record 99.8% absorption. In addition, these coatings adhere extremely well, withstand very large temperature changes and can be applied to virtually any substrate, even those with complex geometries and – important – the layers can be adjusted over a wide spectral range to almost any required reflection or transmission characteristic

Thanks to the optimal properties of the coatings, they were and still are the material of choice for many space missions. For example, Acktar’s black coatings are implemented in the near-infrared spectrograph (NIRSpec) ‘Super-Eye’ – for the James Webb Space Telescope (JWST), the successor to the Hubble space telescope. This 200 kg spectrograph is designed to detect the weakest radiation from the most distant galaxies and measure spectra of up to 100 objects simultaneously.

At METIS (multi-element telescope for imaging and spectroscopy), a coronagraph, the solar corona is measured simultaneously in visible light and UV with an unprecedented spatial resolution. Due to the brightness of the sun, scattered light is inevitably a problem. Although the solar disk is covered, METIS looks directly into the sun. In addition, the surfaces of several components of the optical unit consist of a reflective titanium alloy (Ti-6Al-4V). In addition, there are working temperatures up to 450°C and strong vibrations during the rocket launch. But Acktar’s MagicBlackTM has met the challenge.

But also in the ESA Bepi Colombo project, in star trackers of various satellites, in ESA Sentinel 2 and other projects the black coatings of Acktar were used.

New design thanks to Acktar Coatings

Most star trackers and telescopes use baffles with vanes to transmit the desired light directly to the detector, and to prevent any reflections on the inner walls of the telescope tube.

It is important here to determine the optimum number and size of the vanes, because too many make the system too heavy and expensive; too few reduce the efficiency. So, the vanes have to be as small and light as possible. Thanks to HexaBlack™ coating an alternative, efficient design with very thin vanes of only 20 µm thickness is made possible. This further reduces the problem of edges that reflect light directly onto the detector. In addition, a unique honeycomb-structured surface of thin aluminum foil with the Vacuum Black™ coating has been developed. The honeycomb structure of thin foil of 18 µm thickness and the 1 µm thick coating results in a total thickness of only 20 µm. The thin, coated structure – only a fraction of the usual 0.5-1 mm thick lamellas – and the HexaBlack™ also prevents reflection at grazing angles of incidence.

Due to the deposition process, the coating temperature can be adjusted, depending on the substrate, customer- and material-specific. Thus, the coating of sensitive substrates such as certain glasses, plastics, nickel and wafers is possible at temperatures below 80°C. This opens up almost unlimited possibilities for the deep black coatings from Acktar – even for extreme applications.